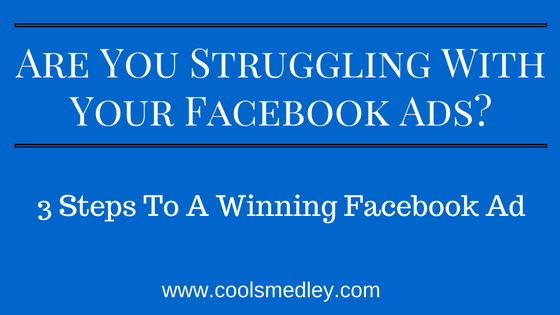 I wanted to answer a recent question I received about ad copy. One of the biggest complaints when it comes to Facebook advertising is “It’s Not Working”. When reviewing 99% of the ads, it almost always has to do with the copy to attract the prospect and getting them to take action, i.e. click to optin/landing page, call, watch video etc.

When you talk about direct response advertising, there is a great deal of competition. Many companies employ direct response copywriting so you must make sure that you have different ways for your advertising to stand up. When you are doing direct response copywriting, you should make sure that you are writing to your prospects as you would write to a friend. This will be slightly formal but informal in the sense that you are writing to the person in a conversational tone. You do not need to stick to a certain length of space within your writing but rather write until what you need to say has been said.

Direct response copywriting is a complex subject so you should read more about this subject because a formula has been developed that you can use. There is no reason to reinvent the wheel when you’re copywriting because that involves more work on your part and people have taken the time and effort to test the different parts of the letter to maximize the current formula and wring out the most sales possible with a direct response copywriting campaign.

There are three main parts usually to a direct response ad. These are the headline, the offer, and the postscript. The headline is the most read part of your ad so you must make sure to grab your prospects’ attention immediately. If you do not grab their attention, you’ll find that your ad is getting passed over through their feed.

Secondly, the offer explains in great detail what a person will receive if they take you up on your offer. The postscript will offer further incentives so that the person will respond immediately.

The third important part of the ad is the postscript. This is where you will be giving an incentive for someone to respond immediately to your offer.

The key behind direct response copywriting is that you want the person to immediately respond to the offer that you have presented. Good copywriting is done by following the formulas that have been established. If your ad is directing someone to a sales letter or VSL then you can use SECRETS OF MILLION DOLLAR SALES LETTERS – FOR ONLINE AND OFFLINE CAMPAIGNS to guide you through.

By focusing upon the three main parts such as the headline, the offer, and the postscript, you will be setting yourself up to have a high success rate.

Lastly, I can not express enough to NOT use the regular Facebook ad template through “Ad Manager” which restricts how many characters your ad can present. Go through Power Editor and produce a “Dark Page Post”. These type of ads provide you the ability to tell a story using the 3 main parts of direct response ad’s described above.